When we took delivery of Boeing 747-400 G-VWOW on 1 December 2001 we couldn’t have known how the story of this particular aircraft would pan out. Or how interesting it would be.

That’s impressive, but let’s be honest, nothing particularly unexpected. What makes this aircraft so special is what happened after she delivered her last customer to their destination and left the Virgin Atlantic fleet. On 29 October 2015, G-VWOW flew to San Antonio to start a new and very different life. She was acquired by Virgin Orbit, the sister company to Virgin Galactic, and she’s now centre stage of their space launch operations. Her new job? An airborne launch platform, using a rocket called LauncherOne slung under her wing to deliver small satellites into orbit. This is all terribly exciting stuff. Here at Virgin Atlantic, we’re thrilled to see one of our aircraft get this new lease of life and perform such an unusual and important role.

Back in the day. G-VWOW plying the Atlantic.

Virgin Orbit, specialise in launching satellites into low earth orbit using a technique called air launch. The principle is nothing new; NASA were launching X1 rocket aircraft from underneath B50 bombers in the 1950s. But to make it work you need a large, stable aircraft, one that can fly high and fast. Just like the Boeing 747. The advantages of this system are that the smaller satellites, up to 400kg and the size of a washing machine, can be deployed more quickly into their dedicated orbits than larger rockets that launch from the ground. The 747 can be deployed to sites around the world, opening access to space for countless more customers, and cutting out many of the frustrations of traditional, less mobile launch platforms.

The innovators and entrepreneurs using these new methods to launch small satellites in a quick, affordable and reliable way are the new space pioneers. This brings huge benefits to all of us earthbound humans. It’s better for the environment for a start, enabling us to map more fuel-efficient routes for ships and planes, or police illegal fishing. It also allows people and organisations who haven’t previously had access to space, like students and tech start ups, to do amazing things that were previously too expensive. Things like connecting rural communities or monitoring global climate change. Seriously exciting stuff.

To prepare the aircraft for the rocket launching role, Virgin Orbit first stripped out all the cabin interiors of the lower deck, leaving a large empty open space.  They then built their customer launch pylon and attached it to the inbuilt fifth engine mount on the underside of the left hand wing of the aircraft. This unusual feature was included in the original Boeing 747 design and is capable of supporting a fifth engine should it be needed to be transported anywhere for maintenance needs. It’s something we at Virgin Atlantic only used once, but a quick search on the internet will show images of ‘five engined’ 747s.

Kelly leads the flight crew down the stairs of Cosmic Girl after a successful first flight with a mated LauncherOne in November 2018.

In a clever move Virgin Orbit adapted this function to become their pylon for carrying and launching their LauncherOne rocket. The two-stage rocket, which is just shy of 70 foot long and designed and built at their rocket factory in Long Beach, California, has flown several times attached to the aircraft. Last month it  achieved a real first when it was  dropped from the wing for the first time. The purpose of this first drop was to  to better understand the rocket’s behaviour as it falls away from the aircraft before ignition. On this occasion the rocket wasn’t lit, and filled with water and anti freeze to match its launch weight. The test was flawless and the rocket fell safely to Earth. This successful flight paves the way for the first satellite deployment in just a few months. This was one of the most critical moments of the f whole test programme, and according to chief test pilot Kelly Latimer it went smoothly. “The whole flight went incredibly well. The release was extremely smooth, and the rocket fell away nicely. There was a small roll with the aircraft, just as we expected. Everything matched what we’d seen in the simulators well — in fact, the release dynamics and the aircraft handling qualities were both better than we expected. This was the best kind of test flight sortie from a test pilot’s perspective — an uneventful one.”

What? No Upper Class? Onboard the Upper Deck mission control (photo Virgin Orbit)

We can’t wait to see the rockets fired for the first time. We’ll be here looking proudly on, as Cosmic Girl flies to the new frontier and takes her place in the incredible story of human endeavour that is space exploration. 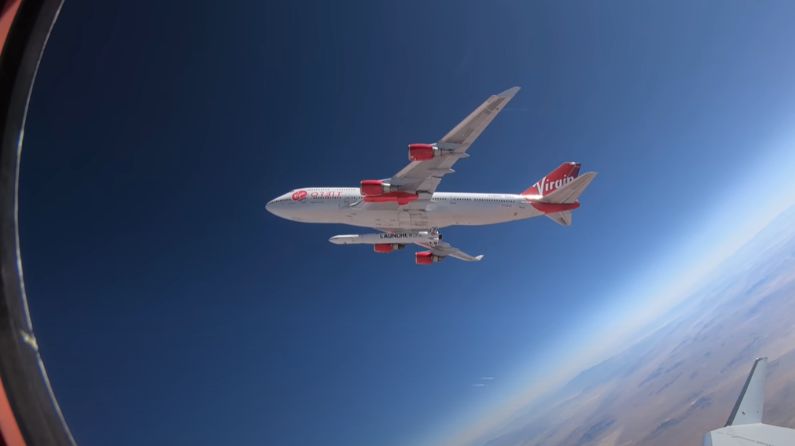