Behind the scenes: A350 air-to-air photography

Air-to-air aviation photography is a hugely challenging field, and in our opinion, these shots are right up there with the best. This is how it was done.

Air-to-air aviation photography is a hugely challenging field, and in our opinion, these shots are right up there with the best. This is how it was done.

Before Ian could even begin planning, he had to find out if our marketing teams were interested in his idea. This isn’t something any airline would take lightly. It involves some very unusual flying; something viewed with deep suspicion in the super regulated and procedure-driven world of commercial aviation. But our A350 project and marketing teams, unsurprisingly, were up for it.

Ian’s idea, if he could make it happen, would cost far less than commercial air to air photography services. But first, the flight had to be approved by our flight operations management and then have a full risk assessment from our safety team. Once those critical tasks had been completed and passed, Ian set about finding a suitable camera platform. Having flown fast jets during his Royal Air Force career, he knew what he was looking for and soon found some Strikemaster jets (more about these in a minute) on the UK display circuit.

Mark, Ollie and Jamie have one final briefing before the flight

The next job was to find a location to take the photos. Ian wanted dramatic coastlines and green fields, the marketing team wanted blue skies and puffy clouds. He also needed to keep a cautious eye on the fuel bill! The west coast of Wales, near Anglesey, seemed right. It was mostly free of other air traffic, especially at the weekend, and provided the right backdrop for the photos. Then it was time to work out how to get an empty A350 (we only owned one at the time) overhead of Anglesey, on a day when the Strikemasters were available. There was so much that could derail the plan but a ferry flight from Gatwick to Heathrow on a Saturday morning looked promising if they could take the scenic route. And the Strikemasters, indeed, were available.

In the weeks before the flight, the five pilots had four briefings where they carefully planned how they were going to fly. The briefings covered the manoeuvres needed to get the shots, how they would communicate and most importantly, the procedures they’d use if anything went wrong or they lost sight of each other. The final briefings took place on the morning of the flight when it became obvious that the weather, the most unpredictable part of the plan and the last piece of the jigsaw, was going to play ball. In fact, it was perfect. The stars were aligning.

It was important that whoever was flying the Airbus had military formation flying experience, so they’d understand the nuances, the language and the challenges of close flying. Step up Captain JJ Burrows, our director aircraft operations. A former RAF Tornado pilot and currently on the A350, JJ agreed to take the flight. Sitting alongside him was Captain Rob Lawton, one of our most senior pilots, who’s responsible for all technical and operational requirements for the safe, compliant and efficient functioning of the Airbus Fleet.

Joining JJ and Rob on the flight deck was senior first officer Steph Goodwin acting as a safety pilot. This was a very non-standard flight, and JJ and Rob needed Steph’s experience as a third set of eyes and ears on the flight deck. Normally allocated on a training flight, a safety pilot also monitors the operation of the aircraft and acts as a mitigation to the high workload. Once in the air, while Rob and JJ were actively flying the aircraft and positioning it as required by the photography aircraft, Steph took some of their workload off them and stood ready to highlight any variances that could lead to safety issues. She also did a decent job of grabbing a few photos from the Airbus.

Rob keeps an eye on his visitor. Photo Steph Goodwin

The best aircraft photos are taken at altitude in a clean configuration, in other words without any of the flaps, slats and wheels deployed at low speeds. This means the shoot had to take place at exactly 230Kts so the Strikemasters could keep up with the slippery A350. The only type of aircraft that would be able to do the job at that speed would be a jet. Ian knew a couple of people who ran NWMAS Ltd (North Wales Military Aviation Services Ltd) who maintain and fly the Strikemasters. Described by Ian as ‘the only military jet that is more pointed at the back’, the Strikemaster is a development of the Jet Provost trainer that first flew in the 1950s. The Strikemaster variation is capable of a light attack role with upgraded engine and avionics. So they’re fast and agile, but also have a large canopy, side by side seating and – for some reason this was important to Ian – live ejector seats. The perfect aircraft to use as a cameraship.

The Strikemasters are based at Hawarden Airport, right next to the Airbus Broughton factory where the wings of the A350 are made, and just a short hop from the location Ian had chosen on the Welsh coast. Flying the Strikemasters were Mark Petrie, a former RAF pilot who currently flies for another airline, and Ollie Suckling, an RAF Hawk instructor. Two hugely experienced pilots who can often be found flying close formation displays together at UK airshows.

JJ, Rob and Steph took off in G-VLUX at 1.30pm on Saturday afternoon. With a limited range, the Strikemasters waited at their base until they’d seen (on Flightradar24 of course) that the Airbus was airborne. It was then time to head off for the rendezvous. If you’d spoken to Ian a couple of days beforehand, he was convinced there was little chance of the mission being a success. There was just too much to go wrong. Yet here he was, climbing up towards the rendezvous, in perfect weather. It was game on, and all that planning now came down to the next hour. There was just one shot at this. No pressure at all.

“The air traffic controllers at Swanwick were brilliant,” said JJ. “They gave the Strikemasters a fighter type intercept, using bearing range and angle that allowed us to easily find each other.” Onboard the Strikemaster, Ian spotted the A350 from 16 miles away! They flew to a bloc of airspace allocated where the three aircraft could fly their pre agreed course, while also taking a few detours to catch the sunlight. As the Airbus flew a racecourse circuit, the Strikemasters took turns in joining from both sides to try to capture the photo angles that had been agreed with our marketing team beforehand.

Flying in the second Strikemaster, and focusing on video, was leading aviation photographer Jamie Hunter whose company, Aviacom, has built a reputation for top quality air to air photography and videography. With Ian in the left seat of one Strikemaster and Jamie in the right-hand seat of the other, they had every angle covered. They were then able to direct the pilots of the Strikemasters to make small changes to their position to get precisely the right angles. 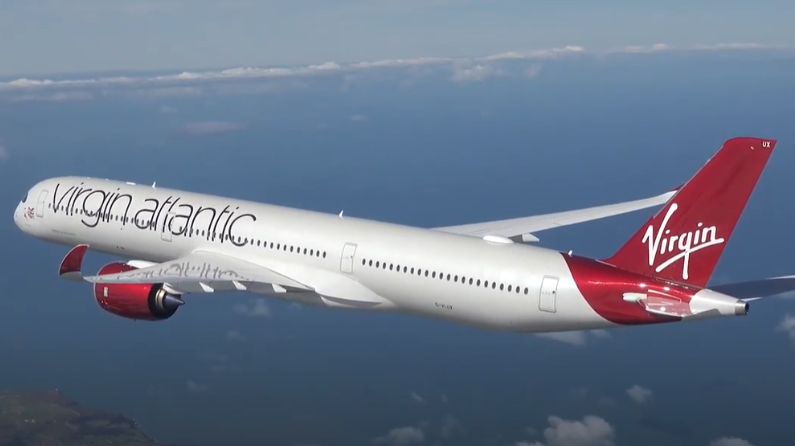 A tremendous amount of thoughtand a photographer’s eye went into the composition of the photos. How the wingtip was placed in the frame, how you see both engines, the logos. It was an intense hour of flying, and it caused a bit of a stir on the ground. Social media soon lit up with people spotting the giant jet flying around with two military aircraft in attendance. Quite an unusual sight, but over all too soon. G-VLUX then turned and headed to Heathrow, the first time our new A350 had landed there before starting normal scheduled services the next morning. The Strikemasters returned to Hawarden to debrief and have a good look at the spoils of the day. It soon became clear that the mission had been a huge success

“The most frequent question I get asked is “what camera do you use” and the reply is always the same: Nikon!” Ian said. “I’ve used Nikons for the past 40 years, so they sort of fit like a glove. It helped as well that Jamie my photo wingman is also a big Nikon user. It might seem insignificant, but when two photographers are on the same shoot it’s a big bonus to use the same equipment. Pre-flight we ran through some tactics to ensure we were both shooting with similar settings. While it’s great to have two pairs of eyes and ideas it’s also important that the colours and levels all look similar for marketing purposes.

“In the air, we shot using a mix of the new D850 and D4s, with lenses from 24-120mm. I prefer to use the standard 50mm 1.4 because it’s so sharp, but zoom lenses have come on a long way and now it’s easy to shoot up to 120mm even with the canopy glass distortion. The results speak for themselves – it was a Nikon moment for sure.”

Ask any of the pilots, and they’ll tell you it was a fun day. The aircraft were in formation for 50 minutes with a total of 90 minutes in the air. This sort of flying doesn’t come around very often but we’re glad it all came together, and the results are truly spectacular. The pictures on this page are just a taster. We have many more to share in the coming months. And Ian is already thinking about our A330-900neos coming in a couple of years!

With special mention to Karl Corcoran who created the A350 flight plan and Ellie Powell for the safety assessment.